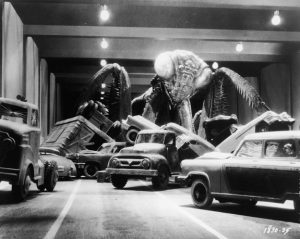 se lines on the pavement are there for a reason, you know,” hissed the giant insect to no one in particular. It was doubtful that anyone could hear her; what with all the screeching of brakes, honking, and screaming.

One could see her point, no one seemed to be parking in an orderly fashion. Back at the nest, everyone understood their role and knew their place. It was always a full house but it didn’t seem crowded and everyone was calm. There was no reason not to be calm. What was the problem this evening?

Through the screams she caught snippets of human-speak and tried to understand. It wasn’t easy. Her language was a series of clicks and hisses: mathematical, simple, logical. This sounded like whining. She hated whining. What was the point of complaining?
“…don’t want to be late.”
“All the good forceps will be taken.”
“…can’t use that dim bulbed scope again.”
“There’s a giant bug on my tail!”

It was all unintelligible. Only the screams made sense to her. They gave a clear signal of fear and panic. What possible reason was there to panic?

We don’t recommend panic at Bug Night but there is a sense of urgency. There are only a few sessions left together and we have many vials to go before our journey together ends. Steve and Michele would love an opportunity this year to work on a sample or two to help move us along and have all 2016 samples finished before we begin 2017 field work.